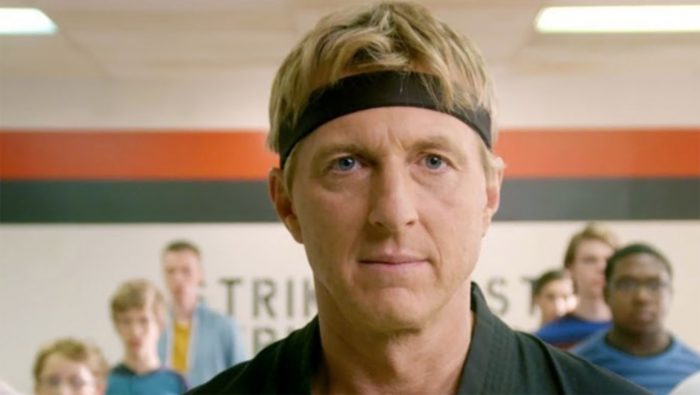 Being a card carrying unabashed Gen-Xer means I love all things eighties and early nineties which means that it is no surprise I instantly fell in love with the Karate Kid throwback series Cobra Kai. I adore that show for so many reasons, least of which is the redemption of Johnny Lawrence and in a bigger way the redemption of us all.

In the mid-eighties the actor William Zabka who portrayed Johnny Lawrence, with his good looks, mid-twenties physique, martial arts skills and resting prick face, was the go-to villain in what seemed like every high school film at the time (Greg Tolan anyone?).

The thing is who didn’t feel like they were inferior growing up? I know I did.

In spite of enjoying the hell out of high school, I was the shortest kid in my grade, weighed 98 pounds, had size 11 feet which made me look like a smurf and to top it off didn’t hit puberty until my senior year (Summer camp showering without pubes was a nightmare). I was so bad at sports that the only team I could make was the wrestling team because I was so freakishly little, and even then I lost every match (including one to a guy who only had one leg… in like thirty seconds), not to mention I smoked a half a pack of cigarettes a day and had asthma. Yes, when I turned eighteen, I shot up five inches, gained forty pounds and finally grew into my nose and feet, but high school has a way of trapping our self-esteem in an amber that we take with us our whole life.

Even though I was lucky enough to make people laugh and be the goofy class clown,  I definitely had my fair share of incidents where I was made to feel inferior by other dudes my age who looked a decade older than me. I played it off like it was an accident but my freshman year I had my ankle broken by an upperclassman and was given a tiny balloon at a party that was supposed to be a condom for me because I was so little. So of course, I would identify with a certain Daniel LaRusso and at the time take joy in his ability to get the girl and beat down the big jocky jerk.

But you know what? That was ridiculously black and white, wholly inaccurate and way too convenient a way of recalling history.

The reality was for someone who felt inferior I ironically I spent way too much of my time making other people feel that same way as well. Being painfully short my whole life the weapon I learned to hone was my quick wit and my sharp tongue. But being the hero of my own story I only identified with the humor and rebellious aspects of myself. What I neglected to take responsibility for were all those times that I made other people my age that were going through their own physical and emotional awkwardness feel bad about themselves by my words. So while I might have been a waify little flee physically, in some ways with my words I was crueler than Johnny Lawrence.

The thing is life is a work in progress in so many things, especially empathy. I like to think had I just known how hurtful my words were at the time to others (especially given how bad I felt about myself) I might have acted differently. To this day it is something I struggle to reconcile with myself and a regret I will always carry.

Now as far as those other people (and there were only a few) that bullied me, some were definitely major pricks in their own right, but God knows being not adults themselves they were probably going through their own pain and feelings of insecurity and I am guessing as oblivious as I was to how much pain they were causing me those times. My point here is that good people do bad stuff, especially on their journey through adolescence to find themselves. Hell, one older guy that used to kick the crap out of me in 7th grade for a month straight became one of my closest friends in high school.

But all of this is just a trickle to the one true fundamental truth that is all too easy to forget. Yes people can suck but, ultimately our self esteem can not be governed by anyone other than ourselves. Our internal dialogue, hang-ups and insecurities do more to keep us in a box way more than any person on this earth, no matter how intimidating, ever could. It’s way too easy to blame people like Johnny Lawrence instead of learning to be easier on ourselves and love who we are, warts and all.

In those regards I love that show because Johhny is not some caricature of a bad guy who in high school did drugs, rode a motorcycle and beat people up. He’s just a guy who screwed up and is trying to find himself and be the best man he can be. In that sense he’s all of us and deserves a chance to be the hero of his own story as well. And Danny LaRusso in some ways isn’t such a nice guy either, both later in life when he becomes a rich douchebag making bad commercials but also in high school when he’s piping a hose into a bathroom stall while Johnny’s just trying to roll a joint. And to be fair to Johnny 35 years later, the man has a healthy appreciation for heavy metal, drives a sweet black Firebird and lacks all political correctness, which in my book alone makes him pretty amazing.

Here’s hoping that both Johnny and Danny can spend the next several seasons learning to get along and continuing to rock the eighties hard. #ForeverTeamJohnny