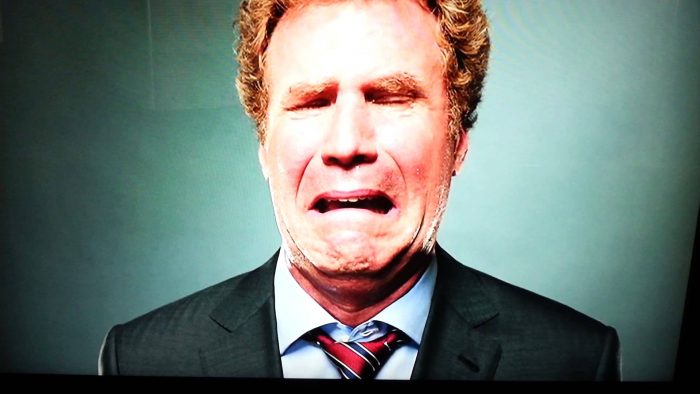 So of all the things a guy can admit to, crying might be the most difficult to fess up to. And believe me growing up I am the furthest thing from what you’d consider a guy’s guy. In 10th grade I was 4’11, weighed 98 pounds, spent my life in art class, recorded “Days of Our Lives” each day, smoked Marlboro Lights and had not been visited by the Pube Fairy until I was 17. And in spite of these dubious formative memories, even then I was conditioned that men don’t cry.

And as bad as crying in the real world got (deaths, broken bones, diarrhea, etc.) the worst crime you can commit is to cry from watching a movie. As a boy you’re trained to make a venison joke when Bambi’s mom gets whacked and even as a young man if you don’t laugh at Leonardo DiCaprio loosening his grip on the wooden door (which he totally could have fit with Rose on) and sinking in Titanic you’re just not a dude.

Which brings me to the Bumblebee scene at the end of The Sixth Sense and the mom. You would think that the Bruce Willis part where he realizes he’s dead with the cold breath would do it, but it doesn’t because you know it’s Bruce Willis and in spite of his epic showing in Armageddon and Die Hard, the guy in real life seems like a total rubber. You might also think it would be when they locked young Cole in the wall, but that doesn’t because Haley Joel Osment does such a good job of portraying a marginally insane head case, part of you thinks he secretly likes being bananas and may start killing people.

Ok, now REALLY coming back to the Bumblebee scene this one is a no brainer.

First of all I had literally zero clue that Toni Colette wasn’t even American and I didn’t recognize her from anything else so I totally believed she was Cole’s long suffering mother. Second, because you’re paying so much attention to the M. Night Shyamalan twist you don’t really notice what a complete raw deal the mom gets in this movie. I mean she is a hard working destitute single parent, kind of has to live with the fact that her kid might be insane, and has to repeatedly watch while he is victimized. So it’s at this moment in the car at the end of the movie that it finally dawns on you that, holy crap this woman has it really bad. That realization alone is powerful enough to make you consider crying.

But then in this scene you’ve got her son Cole, narrating the story, and given that a nine year-old Haley Joel Osment could have been reading the phone book and it would make you want to cry this pushes the viewer even further.

Finally when you learn that all this poor woman really wanted was to make her mom proud and carries that around with her throughout the entire movie as she watches her son unravel like a fishing reel. That’s when after 90 minutes of thinking that the protagonist is Malcom the therapist, you realize that wholly crap I am not Bruce Willis, I am the mom. In fact I’ve been the mom the whole time and didn’t realize it.

And it is at that point my friends, that Shyamalan gets me every time and I get all choked. To be fair it’s not like an ugly Carrie Matheson cry, it’s more of a slow building eyes welling up with a snotty inhale inaudible whimper.

But still for a guy that counts as crying.

And in case you think I’m a total wuss, I posted this scene below….I defy you to watch this without welling up like day-old unchanged diaper…

So therefore, if I’m being completely honest, whenever I watch the bumblebee pendant car scene at the end of ‘The Sixth Sense’ it makes me cry…