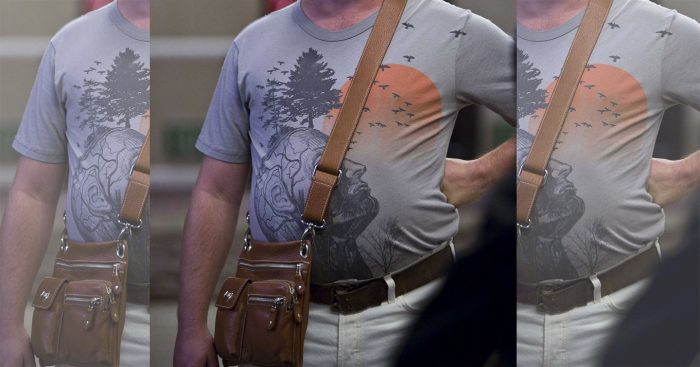 If I’m being completely honest, I like to tuck my t-shirts in, but buckle to the social pressures of leaving it untucked in public…

Before I fully cop to this I do happen to have a medical condition (that my doctor refuses to acknowledge is legitimate) in which when my t-shirt is untucked and air happens to rush across my stomach just like Christopher Cross singing, “Sailing”, I will react to that gale wind by getting a serious case of the trots. In fact as I type this now thinking about it, I could probably go.

Anyway, gastric issues aside, I’ll say it…I like a good tucked in t-shirt.

Growing up in the eighties and through the nineties this was always such a critical component of the ensemble that I still can’t believe people don’t give it the respect it deserves. A tucked in t-shirt has so many advantages.

First off if you don’t have a gut it’s a chance to show the ladies that you take care of yourself with some solid time in at the gym and a healthy diet of protein bars and sugarless beverages. And if you do actually happen to have a gut and still tuck it in, this just means that you ooze that much self-confidence that you’re willing to let the world in on what’s going on under the hood, which in itself is even more sexy.

A tucked in t-shirt also is a fantastic representation of exactly how well you accessorize and how important you really are. I mean what’s the point of having a sweet leather rope belt that you fold in on itself so it always points to the ground, if nobody can see it. And I know it’s not a thing anymore but back in the day nothing said I’m a “wanted commodity” more than a beeper holstered to that denim waistline for all to marvel at…that sense of pride never goes away. And do I even have to go into how awkward a slightly rolled up short sleeve looks like if that, one size to small t-shirt, is left un-tucked below. I’ll tell you what it says, it says “I am an uncultured savage who doesn’t take my grooming seriously”. Not to mention a man should never rock out a vest if there’s bits of shirt hanging out at the bottom. I could go into all the other fashion pairing reasons, but I think you get the picture.

From a hygienic standpoint a tucked in t-shirt is also just that much better. I’ll give you an example. Let’s say two men are standing at the urinal and one is living under the false security of an untucked shirt that is more than capable of covering up any odd drip spots. That person is going to be way more reckless than the man who knows even a nickel sized wet stain means they day is destroyed. This type of forced discipline is what I’m talking about.

The problem is I am after all just human and can only sustain so much shirt shaming before acquiescing to the petty norms of society. Do you even know what it’s like to be called an extra in a Mentos commercial? Just hearing the phrase “the fresh maker” sends me into cold sweats and belly pains. Well all of that eventually became too much to take and sometime around 2012 I stopped tucking in my t-shirts and began walking around just like the rest of you lemmings.

But you know what? Once I get behind the safety of my own front door I immediately take to my mid-section and with military precision, I tuck that puppy straight back in.

And in that moment I’m me again.

So if I’m being completely honest, I like to tuck my t-shirts in, but buckle to the social pressures of leaving it untucked in public…