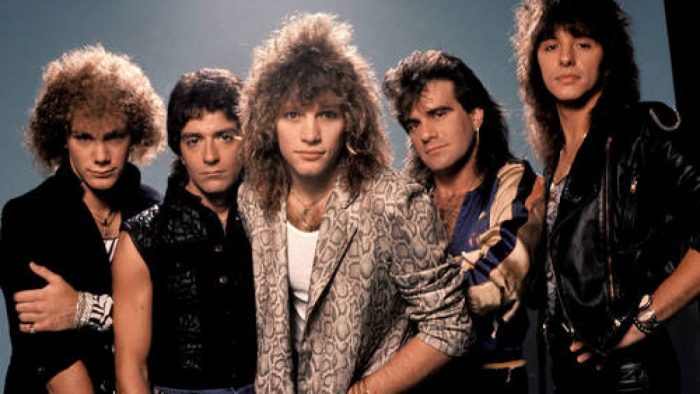 …Let that sit with you for a moment.

To be fair I’ve been a cheesy hair band fan since I fell in love with the Kiss album Destroyer when I was six years old and spent my formative time in grammar school posting pictures of Ratt, Motley Crue, Quiet Riot, Def Leppard (pre-Hysteria), Cinderella and Metallica on my bedroom wall.

However the crown jewel of my collection and only real poster in the mix was Bon Jovi. From the first time I heard the song “Runaway” on WAPP (the best rock station ever in New York next to WLIR) I was hooked. At the ripe age of eleven I saw my first Jovi concert at Madison Square Garden. It was like nothing I had ever seen in my eleven years on this earth.

Unfortunately the “7800° Fahrenheit” tour never came through New York the following year so I had to sit it out which really blew. However with the release of Slippery When Wet in 87’ I saw these cats twice at Nassau Coliseum, which happened to be about five miles from my house…so I was able to get my parents to drop us off. With the “New Jersey’ tour in 88’ I only had one opportunity but got the chance to see the boys for the first time in their home state of New Jersey which was about as close to touching the hand of God I will ever come in my life.

Caught them again in 89’ in both Long Island and at Madison Square Garden.

Jovi at this point kind of went dark the next few years. What’s important to note is that 1991 was the year that “Nevermind” by Nirvana broke and changed the face of music forever. It was the best time in the world to be 18 years old… and scalping tickets. I got to see Jane’s Addiction, the Chili Peppers, Alice In Chains, Nine Inch Nails, Sound Garden and Ministry. In addition to grunge and industrial music I also fell in love with the whole quasi-new wave rock scene of the Cure, Morrisey, Siouxsie and the Banshees and even New Order.

I never sold out my allegiances to the rocking balladeers of the eighties but it definitely seemed that their time had finally passed. Out of pure love for Jovi, I saw them play twice in 93’ thinking this might just be the last gasp and farewell for Jon, Richie, Tico and Dave. I really thought this was the final time the world would ever see of the boys from Sayerville.

In the midst of this grunge rock, flannel laden Seattle landscape, like a finely manicured working class middle finger; Bon Jovi rose from the ashes, reinventing itself as a hard rock band for the nineties. Sure Jon cut his hair but with jams like “Keep The Faith”, “In these Arms”, “Dry County” and “Bed of Roses” these guys started a new chapter that would see them out last every single grunge act in the nineties.

Holy crap, I totally forgot I was supposed to be writing about the 22 concerts I’ve been to and instead lapsed right into my Jersey induced Jovi worship. Anyway, I saw them once more in 93’ while at school in Pittsburgh and then again twice more when they played at Jones Beach Amphitheater in the summer of 95’.

The back end of the nineties never quite lived up to the first half music-wise but the year 2000 saw the band resurge once more with their release of the album “Crush”. I saw them twice on that tour, and then four times over the next few years for both the “Have A Nice Day” and “Bounce” tours. It was at this point that I vowed to only ever see them play in New Jersey, as anything short of that would be criminal. I caught them seven more times, twice at Giant Stadium, four times at the Prudential Center for the Lost Highway tour and then once more for “The Circle Tour”.

So there you have it, twenty-two concerts in almost thirty years. Several things to note about my obsession. Because I was such a die hard Jovi fan, when I got my fake ID in college I paid close to $1,000 for one that said I was from Sayerville New Jersey… outside of my wife Jen who is from Pennsylvania, five of the last girls I had dated also happened to be from (you guessed it) New Jersey, my AOL screen is still BonJoey (even though they discontinued AOL messenger), and my hairstyle has pretty much matched Jovi’s nineties cut for me until this very day… as sad as that is. Oh and the reason why I never chose a Bon Jovi song for my wedding you ask? Well if I ever got divorced I didn’t want to ruin the song.

Now if you’re a quick study you’re probably thinking, but wait there were way more concerts and tours since 13’ why the hell didn’t he go to those. I’ll tell you why, very simple. When Richie left the band it stopped being Jovi and just became Jon, Tico and Dave. I hold out hope the band will reconcile and bring Richie back, but until that day comes Bon Jovi only exists in my memories and in my heart.

After reading this my concert track record might be my least embarrassing aspect of this entry, but if I’m being completely honest, I have actually seen Bon Jovi in concert 22 times…